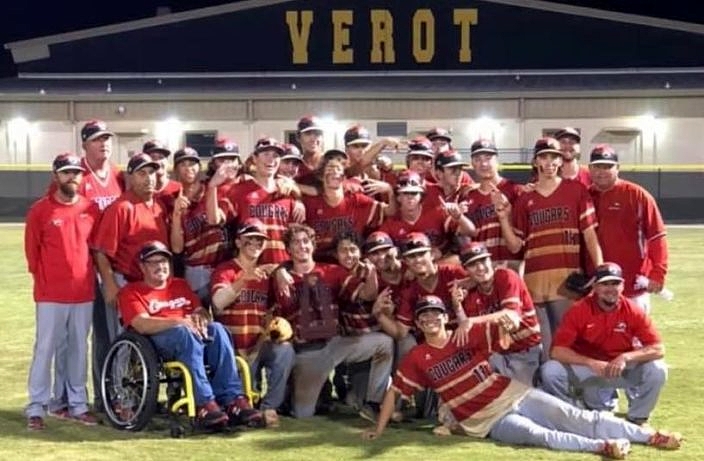 The 2021 District 3A-10 champion Cardinal Mooney Cougars. *Photo from @mooneybaseball.

For the second straight postseason, the rival Cardinal Mooney Cougars and Bishop Verot Vikings battled it out for the district crown. Just as they did back in the 2019 title game, the Cougars again prevailed victorious to raise the 3A-10 championship trophy. Mooney rode a six-run third inning for an 8-2 victory over the host Vikings, celebrating the victory on their rivals’ field.

The Cougars (19-7) will now host in the opening round of next week’s regional playoffs, where they will welcome the Melbourne Central Catholic Hustlers (13-7). Bishop Verot also earned a regional playoff berth, and the Vikings (19-8) will travel to take on the 3A-9-champion John Carroll Rams (15-9).

Nearly every offensive starter reached base to contribute for the Cougars, who jumped out to a 2-0 lead right away in the top of the first inning, before opening up that lead with the big third inning. Aidan Troy was 3-for-4 with a double, a triple, two RBI and two runs, and Luke Holman went 3-for-4 with two runs to set the tone at the top of the order.

Before the fans could barely take their seats following the National Anthem, Mooney was on the scoreboard. Holman ripped a lead-off single and Troy followed with a shot to right field for an RBI triple. A Caden Chamberlain infield RBI ground out then plated Troy.

The Vikings answered back to get on the scoreboard and cut the deficit in half with their first swings in the bottom of the first. Brady Loughren led off with a single, advanced into scoring position off a wild pitch and then scored thanks to an RBI single to right off the bat of Andreas Mantz.

The 2021 Bishop Verot Vikings, who finish as runners up in 3A-10 and also qualify for the regional playoffs.
*Photo from @BishopVerot.

That tight, low-scoring tug-of-war has typically been the norm when these two teams meet. But in the third inning the Cougars broke from that norm.

The first five batters all reached to start the frame and get the rally pumping. Alex Santa Maria and Holman had back-to-back base hits, and Troy delivered an RBI single to left that scored Santa Maria. A wild pitch allowed Holman to come in, and Todd Velotta walked and Chamberlain reached with a bunt single that filled the bags. Jack MacKinnon supplied a sac-fly RBI on a fly ball to right with enough distance on it that Troy was able to tag up and score. Landon Jensen then drove in a pair with a two-RBI double, and Drew Marra got in on the action with an RBI double as well.

Bishop Verot was held in check by Cougars starter Jaden Stockton over his final four innings of work, as Stockton allowed one run on five hits and two walks in five innings, and he struck out six. Bronson Sessa took over on the hill and closed out the final two frames, the Vikings managing just one last run in the bottom of the seventh in their final rally bid.

Freshman Joseph De La Nuez got it started for the Vikings, with a base hit to lead things off. Loughren walked, but was then erased on a fielder’s choice from Velasquez that put runners on the corners. Mantz then got the infield ground ball he wanted for the RBI, the only time he was retired in going 3-for-4 on the night.

The next batter produced an infield grounder for a routine putout that ended the contest and cued the Cougars’ championship celebration.