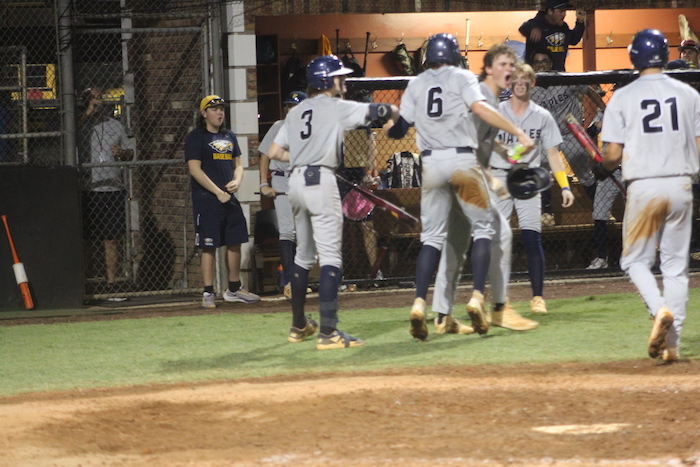 Naples players celebrate after two runs score in the fifth on a Marcos Torres single to put them in the lead 3-1.

It must have been some trip back home across Alligator Alley.

Having already made a surprising unexpected run to the regional finals, the Naples Golden Eagles, the No. 7 seed in Region 4-5A, stepped on to the field at American Heritage in Plantation on Monday night a decided underdog.

After all, they were up against the No. 1 seeded team with a 26-1 record and ranked No. 19 in the entire nation by Baseball America so why wouldn’t they be? Ah yes folks, but as it’s been said many times over the years, that’s why they play the game.

The Golden Eagles took the field like a team completely unimpressed by all the American Heritage hype and two-and-half hours later, stormed the field in mass celebration following a stunning 4-2 victory over the Patriots in a Region 4-5A final.

And with that, Naples punched its ticket to the state final four for only the second time in program history. Their only other trip in 2009 resulted in a state title.

The Golden Eagles will now take their 22-9 record to Hammond Stadium in Fort Myers this Thursday, May 19 and play the role of underdog again as they take on Tampa Jesuit, a program that hangs a half dozen championship banners on its field and a team that outscored its three regional opponents by a combined score of 40-3. Game time is 1 p.m.

“Wow! American Heritage is American Heritage, the cream of the crop,” said euphoric Naples manager Jimmy Nocera. “We knew coming in here tonight we were going to have to play very well to beat this team and that’s exactly what we did. I”m just at a loss for words right now. Everybody counted us out a month ago when we were struggling because we had a rut where we lost four out of five games. But we really got things turned around in April and started playing well and that carried right over into the postseason.” 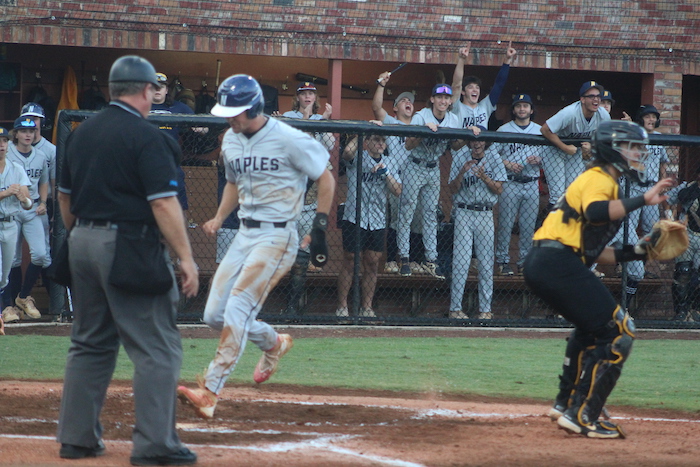 Even a 5-1 loss to Barron Collier in the district final didn’t derail Naples. Their strong regular season still got the Golden Eagles into the playoffs as a wild card No. 7 seed and all they did was travel to Miami and knock off No. 2 seed Belen Jesuit in a quarterfinal before avenging the district loss to Barron Collier by beating the Cougars 5-2 on their home field in a semifinal.

But those wins paled in comparison to Monday night’s victory.

If anybody should brag, it’s Torres. He came through with the biggest clutch hit of the night when he stepped up with the bases loaded and two outs in the top of the fifth and game locked in a 1-1 tie. He then laced a line shot into center field scoring C.J. Bussell and Michael Graziano to put the Eagles up 3-1. Johnny King, who had just relieved Naples starter Reilly Witmer in the last of the fourth on the mound, then helped himself even more by delivering an infield single to score Jason Bello to make it 4-1.

The entire three-run rally had come with two outs when Bussell, with nobody on and two outs, laid down a perfect bunt where he just barely touched the base ahead of the throw and was called safe. Heritage starter Erik Blair then walked Graziano before giving way to reliever Evan Dobias who promptly walked Bello loading the bases setting the stage for Torres’ heroics.

“A huge at-bat right there and no doubt the biggest hit I’ve ever gotten in my life under the circumstances,” said Torres, a senior who is committed to Flagler College in St. Augustine. “I was sitting on the curve ball because I felt it was coming. My last two at-bats, I was doing too long of a swing, trying to go deep. So I tried to cut it a little bit and go up the middle. I’m not trying to be cocky but I’ve been pretty good with the bases loaded all season and just did my job and produced for my team.”

King then took the mound and basically slammed the door. But that last out is always the toughest as Heritage didn’t go down without a fight.

Down to literally their last strike, pinch hitter Manual Henriquez reached on an infield single and moved to second on a throwing error at second base. Zain Diaco then singled him home with a base hit to right making it 4-2 which brought the tying run to the plate in pinch hitter Brian Cordero. Even after getting Cordero in an 0-2 hole, King still had to grind it out as he ran the count to 3-2 before striking him out swinging, prompting the Golden Eagles celebration.

“A crazy experience, a crazy night,” said King. “I just had to try and relax when I went in there and hold my composure. It all worked out.” 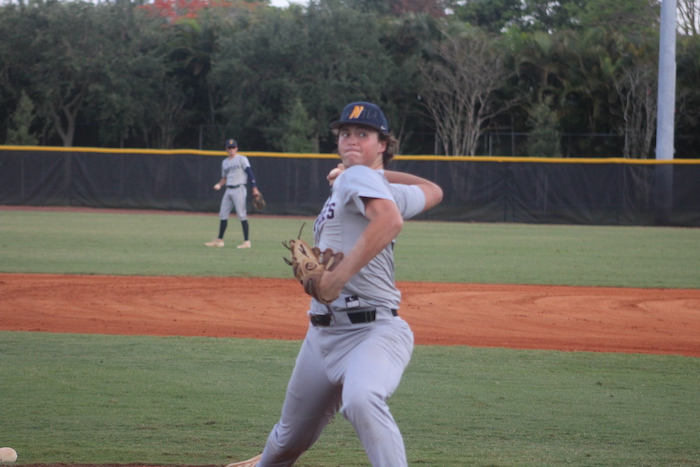 While Nocera was certainly proud of what his kids did, he was also proud of what the win meant to baseball in the city of Naples and Collier County as a whole.