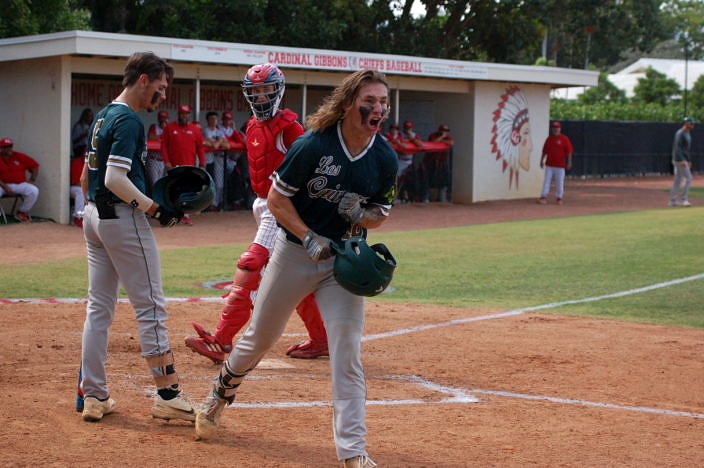 The Island Coast Gators came into Ft. Lauderdale as the lower seed in the 4A regional tournament. But they looked like anything but an underdog against Cardinal Gibbons on Saturday afternoon in a 5-2 victory that advances them to the first regional final appearance in school history.

“First off, this has been a bugaboo for us,” Gators manager Clint Montgomery said. “This spot, this is our fourth time to this round in school history and we’ve never gotten over that bump into a regional final. So, we’re in uncharted territory as far as that goes. We’ve been a very successful program. This is only our 13th year of varsity baseball and this is our ninth trip to the playoffs, so I don’t know a lot of schools that can boast that. I’m excited for the school, I’m excited for our players and I’m excited for our fans. You know I couldn’t be happier.”

The Gators played long ball early getting to the Chiefs’ starter, Preston James, in the second inning for two homers. The first was a solo shot from pitcher Jake Billings to put Island Coast up 2-0, and the second was of the two-run variety from Kevin Martinez, who also pitched later in the game. Gibbons chipped away at the lead in the fourth and fifth innings, but another solo shot from Jake Mueller in the seventh — this time off of senior reliever Wyatt Flack — served as the final dagger. 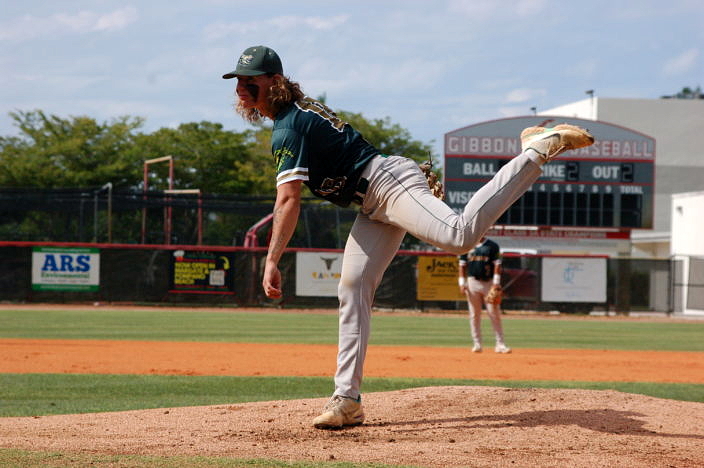 The Gators got stellar pitching performances to limit the Chiefs to just two runs.

“We actually set the school record in home runs this year,” Mueller said. “We had 24 going into today. Amazingly, I’ve never had a team like this. Our team record before was like eight or something. We’ve had three or four home runs in a game and stuff like that, so when they come they come in bunches. Honestly, we’re not a team with much speed or anything like that, so the home run and the double are some of the things that spark our team. Of course, I think that’s the same for any team if they can hit home runs, but it is a huge part of our game just because we lack other tools.”

Aside from the homer, Billings put two more balls over the wall in foul territory and limited the Chiefs for most of five innings of work on the mound. He left in the sixth after a leadoff walk — his first of the day — and turned the ball over to Martinez, who promptly got out of the inning on 10 pitches thanks to a picture-perfect throw from catcher Davin Hickman to catch David Bauer attempting to steal second. The defense showed up again in the seventh when Billings, who had moved to right field, threw out James at home.

“It does feel good,” Billings said. “I’m glad I threw him out. That sure saved the game and definitely put them in a slump.”

The decision to move Billings from the mound to the outfield paid off more than Montgomery could ever imagine and Chiefs manager Jason Hamilton admitted that he sent James expecting Billings to play the ball a bit more awkwardly after recently moving positions. When it came down it, Montgomery said it was a no-brainer to bring in Martinez, who has been Island Coast’s ace all year.

“We got lucky last game and got a 10-run rule so we had our No. 1 Martinez there eligible after only throwing 55 pitches,” he said. “So, when you’ve got that guy in your back pocket, you use him when you’re in a tight situation. But as far as Billings goes, he’s been our No. 2 all year. He’s beat some good teams in Fort Myers and Naples Gulf Coast and pitched really well in a loss against George Jenkins and Altidor. He’s faced some good teams, so he was mentally prepared for the moment. I didn’t know he’d be as good as he was, but he gets a lot of soft contact. He’s not going to strike out 10 a game or anything like that, but he’s going to throw strikes and keep you in games.” 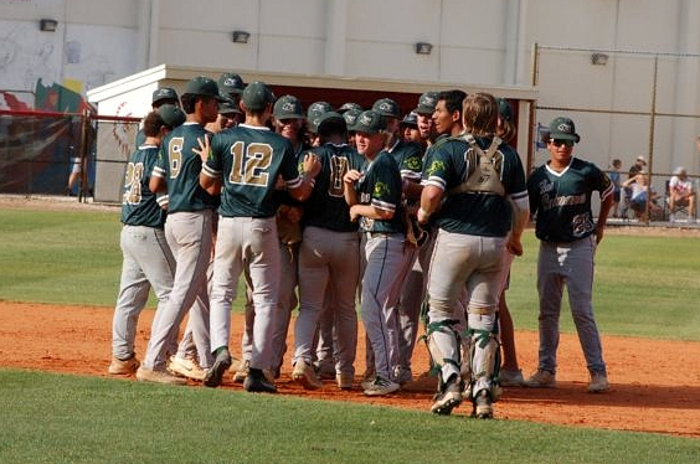 The Gators celebrate their historical victory.

Moving Martinez to the mound in the sixth halted the momentum Gibbons picked up in the fifth. After playing small ball in the fourth to pick up the first Chiefs run of the day, Brad Dunn hit a solo shot to cut the deficit to just two runs. Comebacks aren’t foreign to the Chiefs, but it simply wasn’t in the cards Saturday as seemingly every move made backfired in the end.

“We’re always going to fight,” Hamilton said. “We came in today knowing that their one through five batters were the real deal. They can compete with anyone offensively there. We were trying for those guys not to hurt us but they hurt us. They were a good swinging team. Give credit to them, they played a good game. This isn’t an easy place to come into and play. That was the first game that they had played during the day, but they squared up a couple of balls early on and took an early lead. That’s important in a regional. You get ahead and people have to play from behind. We scrapped and we’ve been behind before, and they clawed, but we just didn’t have enough today.”

The Chiefs were down a pitcher, sophomore Michael Kass who dealt with the flu earlier in the week, but Hamilton entered the semifinal confident that his seniors would give them a chance to win on the mound

“We were going to go with the guys who were healthy and wanted the ball today,” he said. “Wyatt Flack has been in our program since he was born, his mom’s the athletic director here. I met him when he was a baby. Preston James is one of the most high-character kids I’ve had in my entire career. You put the ball in those kinds of kids’ hands and you let them compete and try and win a ball game. We had zero doubt about what we were going to do today, it just didn’t work out.”