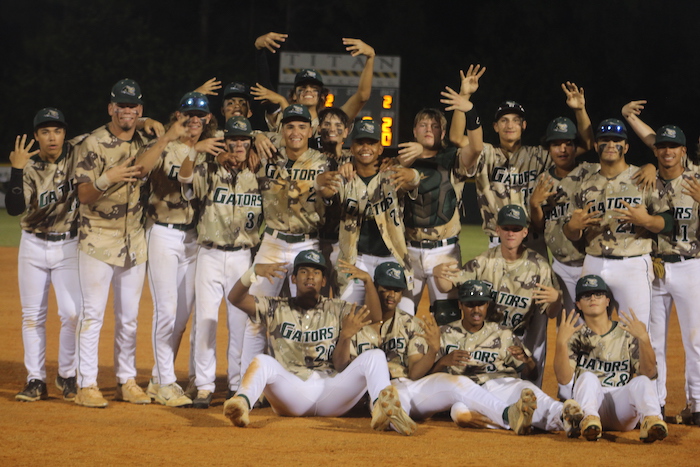 The Island Coast Gators were a happy bunch following their regional final victory over Miami Springs to punch their first ever ticket to the state final four.

Island Coast Manager Clint Montgomery wasn’t sure what kind of pregame speech he would give his players before they took the field for the biggest game in the young history of the program on Tuesday night.

The Gators were playing in the program’s first-ever regional final against a very talented Miami Springs team, HSBN’s No. 1 ranked team in Miami-Dade County for most of the season. If they were suffering from perhaps a little pregame jitters or stagefright from the big stage, it sure as heck didn’t show in any way, shape or form.

That’s because Island Coast played with the poise of an experienced veteran team completely unafraid of the moment and soundly dispatched Miami Springs 4-1 in a Region 4-4A final at Island Coast High School.

The Gators improved to 19-8 on the season and will now head to someplace, perhaps not even themselves, thought would be possible – the state final four at Hammond Stadium in Fort Myers. Island Coast will take on Live Oak Suwanee in a Class 4A state semifinal on Monday, May 23 at 4 p.m. The winner will play the winner of the other semifinal, Jensen Beach and Dunedin, in the 4A title game on Tuesday at 7 p.m.

“When did I think we might have a shot at the final four? About 15 minutes ago,” said Montgomery with a wry grin referring the moment first baseman Jake Mueller squeezed a little pop-up in foul territory in his glove for the final out as Gator players emptied onto the field with a wild celebration. “I talked to them before the game and told them that this was their kingdom tonight. I told them they get to be kings of Lee County for one night but how long do they want to sit on the throne? Is it a one night thing? Or are you guys going to sit on the throne till next week. Looks like they’ll get to be kings for a little while longer. What an effort tonight to pull this off.”

They pulled it off in part thanks to a tremendous pitching performance by junior Kevin Martinez. With the exception of one rocky inning, the second in which he gave up three consecutive hits allowing Springs to tie the game at 1-1, Martinez was nothing short of dominant as he stayed ahead in the count all night and kept Springs hitters completely off balance. 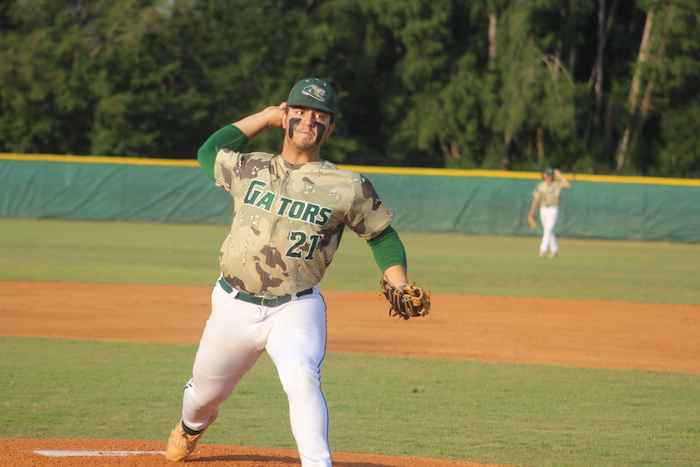 After that second inning, he never allowed another hit and only allowed two base runners over the course of the next four innings (leadoff walks in the fifth and sixth), before handing the ball over to Dylan Masters who put the Hawks down in order in the seventh to end record the save.

“When we learned we were playing Miami Springs, I talked to the team last night and told them that it was going to be a pitchers duel,” said Martinez, a Flagler College commit. “I said that if that they were able to locate balls, scratch out a few hits and scrape out a few runs, that would be enough for me and it was going to get it done. What a moment for this program. We’re re-writing history right in front of everybody. This is the best squad we’ve had and I’m just glad we’re doing it as a brotherhood and a family. We never doubted what we were capable of doing.”

Martinez helped stake himself to an early lead when he singled to center in the first inning and, after advancing to second on a groundout, came home on an Emilio Gonzalez double to the gap in right center. After Martinez survived his one rocky inning in the second when Springs (21-6) scraped a run across on three consecutive hits and an RBI fielders choice groundout by Jordanny Gonzalez, his team gave him the lead right back in the bottom of the inning when Tommy Bryne led off with a single to left and pinch runner Saul Rodriguez eventually came around to score on a stolen base, error and wild pitch.

But it was the last of the third when Gator fans, who turned out enmass to try and watch their team make history, might’ve gotten the idea that is was going to be their night. That came when Mueller, the No. 3 hitter in the lineup, led off the inning by taking Springs pitcher Jordan Vargas’ first pitch and driving it deep over the left field fence for a solo home run. Even though it only made it 3-1 with certainly plenty of baseball left, the shot kind of stunned Vargas and the Springs dugout. Perhaps a message-sender that the Golden Hawks had met their match on this evening.

“In my first at-bat, I didn’t get a single fast ball so I had a hunch he (Vargas) might try and sneak one past me with that first pitch,” said Mueller, an Alabama commit who now has eight homers on the season. “I got one middle-in, was ready for it and got all of it. Winning this game tonight means everything to us. Everybody in this county has kind of looked down on us for awhile, thinking that we were nobodys. We definitely felt a little disrespected so I guess we’re showing everybody we’re here now and ready to play.” 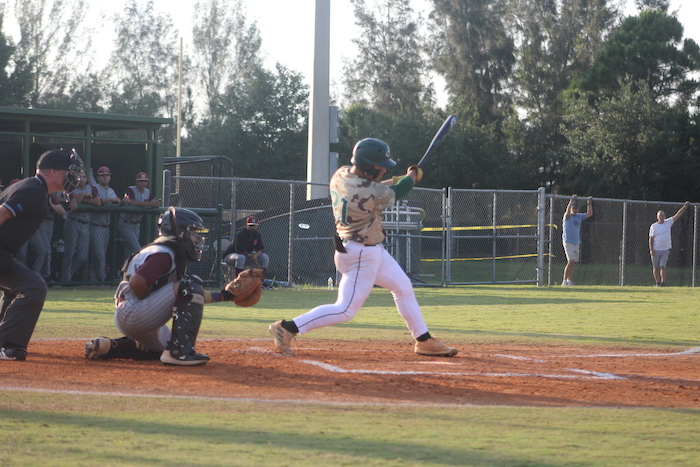 Island Coast’s Kevin Martinez rips a base hit up the middle in the first inning.

Amidst all of the hoopla and excitement of the moment, Montgomery was asked to reflect on the pride he felt in having started this program from the day the school opened in 2008 and build it, brick-by-brick from the ground up.

“The truth of the matter is man, as much as I want to brag about myself and stuff right now, it’s my assistant coaches, my staff that have really stepped up to help me and get us to this moment,” said Montgomery. “I used to hit fungos and throw BP (batting practice) everyday, you name it, I did it. Now I’m pretty much relegated to the dugout because I’ve got so many guys that help me. The coolest thing about all of this is that I’ve got to do it with my dad who’s our pitching coach and first base coach. There aren’t many guys that get to do something like this with their dad and it’s really special.”