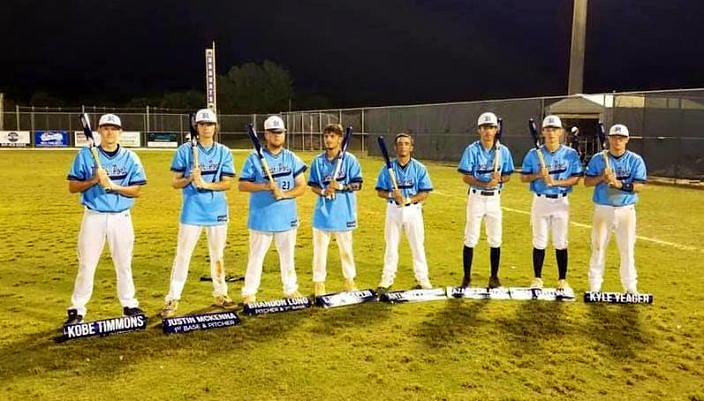 The eight North Port seniors with their personalized new baseball bats for the Class of 2021. *Photo from @CatsBaseballClub.

Not even a tough home loss could erase the smiles of the eight senior members of the North Port Bobcats. Each left the field with a special gift as part of the Senior Night ceremony that celebrated their final home game of their high school careers, on Wednesday night. Although the visiting Port Charlotte Pirates left with the 10-4 upset win, each North Port senior was gifted a personalized baseball bat commemorating the Class of 2021.

Every program does as much as it can to honor its seniors, but with a group as large as the eight Class of 2021 Bobcats on the baseball team it seemed only appropriate to go above and beyond. Amidst the uncertainty and constant challenges of being a student-athlete during this pandemic, and after the Class of 2020 lost these sort of things last year, every program has focused their best efforts on a memorable Senior Night this season.

But the main attraction, of course, was the ball game. The host Bobcats (10-11) grabbed the lead early on with a run in the first inning. Mike Murray singled and Yeager followed with his sixth double of the year that put both runners into scoring position. Brayden Kelly then supplied sac-fly RBI that plated Murray with the first run of the night.

The Pirates (6-11) answered back with a seven-run fourth inning that turned the tides and provided the difference for victory. The first six batters all reached base to get it going, as singles from Landon Carter and Scott Nagy were followed by a walk to Stephen Lomski that loaded the bases. Jeremie Swafford’s RBI single tied up the game, and Michael Weider quickly put them ahead with an RBI base hit to center field. Jeffrey Vivian kept it going with another RBI single, and Ethan Zystra busted it open with a two-RBI double to center. Adrian Nina then capped the big frame by scoring on a passed ball.

Port Charlotte tacked on another run an inning later, as Lomski singled and later scored on a passed ball.

The Bobcats responded in the bottom of the fifth to stay in the action. Brown was hit by a pitch and Brayden Kelly singled with two outs to set up an RBI opportunity for Brandon Long, who answered the bell with a double to left that drove in both base runners.

An inning later, North Port added another run to inch closer. McKenna reached on an error, Salazar singled and Brown connected for an RBI double on a liner past third base.

Junior reliever Jeffrey Vivian held the rope from there to close out the win for the Pirates.