Honoring Seniors In 2021 Is Unlike Other Years 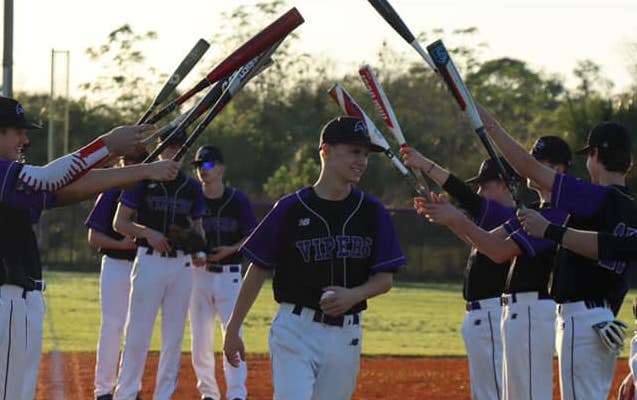 Logan Saltsman is one of five seniors honored during Senior Night at the Space Coast Vipers’ home opener against the Cocoa Tigers. *Photo by Billie Farley.

Baseball is a game heaped in tradition.

For high school baseball players, one of those traditions comes when their high school careers are celebrated their senior years in a ceremony known as Senior Night. This event is typically held before the start of a team’s final home game each season, as it is the last time those seniors will play on their home fields at the conclusion of their careers. Players are honored and the moment recognizes each graduating class and their impact on the program.

With the abrupt disruption of the 2020 baseball season due to the global COVID-19 pandemic, those ceremonies never happened. Teams played their final home games without even knowing it. There was no way to plan for it, and the 2020 seniors were left to be honored in various other ways, however possible.

“It just got cut off last year, and they really didn’t get much last year,” said Space Coast manager Matthew Porter. “I know when I was a senior it meant something to me, and I cannot imagine what they went through when they were told they were not playing anymore. That has got to feel terrible. We are so fortunate that we are even out here this year.”

Though back on the playing field for the 2021 season, the future remains uncertain, at best. Stringent protocols have become part of the norm now, and already numerous baseball programs across the state have had to halt operations due to issues relating to the global COVID-19 pandemic.

Many high school baseball programs across Florida opted not to run the risk of losing their Senior Night again this season, choosing to hold their ceremonies earlier in the season. They have enacted different types of events and original approaches to the celebrations, while also maintaining as much tradition as possible.

These alternatives help to highlight the 2021 seniors and the careers they have had. Many teams use their social media outlets to spotlight their seniors, such as the Navarre Raiders, the Cardinal Mooney Cougars and the Clay Blue Devils. Many local businesses offer ways to promote senior classes, and most programs have also been more aggressive in decorating their home fields with banners and posters that recognize their senior class. 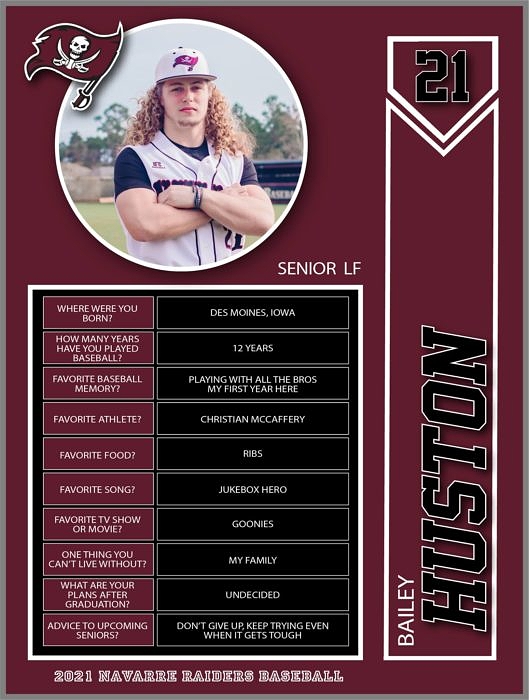 That moment to be celebrated on your home playing field, in uniform, alongside the rest of the team, in front of your family, friends and fans, is irreplaceable. Looking back later on in their lives, most high school ball players can still recall that moment in their timeline.

Part of the tradition has always been for the celebration to be held at the end of the year, with their last high school season behind them and that moment serving as the final reflections. But many teams have chosen to hold their Senior Night celebration sooner this year, in specific games throughout the schedule. The Palatka Panthers even elected to use their preseason contest against the Keystone Heights Indians for their Senior Day. Several teams, such as the Space Coast Vipers, opted to use the home opener for the event.

“We didn’t want to take the risk this year. We got cut short last year, and we didn’t want to take the risk of our guys not having their night,” Porter said. “We made it our home opener this year. Since it is our home opener, there is going to be a big crowd and a lot of people are going to be here. On top of that, with Senior Night, it gives the guys some extra hype for the night. Plus, it was against Cocoa, and we have had history with Cocoa over the years. So we thought it would be a perfect night for them. It ultimately was a great night for them.”

The team conducted the event differently than in years past.

“We did it differently this year,” Porter said. “Usually the guys will have flowers to give their moms down at home plate, and this year we wanted to do something for the dads. One of the booster club member, a dad of one of our juniors, he came up with a really cool idea. When these guys were young, they first learned how to pitch with their dad. Their dad is the one who taught them how to throw a baseball, so we thought it would only be right for them to have a first pitch tonight thrown to their dad. They wrote something special on the baseball for them to keep.”

The short and simple ceremony was held prior to Space Coast’s big win against the rival Cocoa Tigers, and coach Porter agreed that the energy carried over onto the field and helped lead them to a big victory. Players walked under a makeshift tunnel of baseball bats from their teammates, they walked to their coaches and were congratulated by them, they threw out their first pitch to their father, and they had flowers for their mothers, or their grandmothers, or their significant other. Through the whole thing the announcer shared what they will be doing in the future. 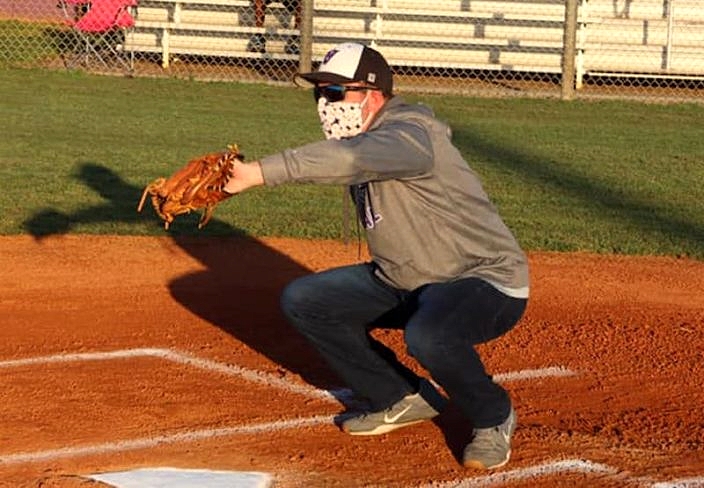 The fathers kept the personalized baseball.

Other teams, such as Estero, Trenton and East Bay, also chose to use their home opener for their Senior Night festivities. Across Florida, programs are doing their best to make it happen and make it special. At Trinity Christian Academy in Deltona, the team has two events planned, a Senior Day during a March 15th day game against the DeLand Bulldogs, and a Senior Night during the Eagles April 6th night game hosting the Taylor Wildcats.

Most teams have opted to stay with tradition, however, and their event is slated for the final home game on their schedule.

“I never doubted that we wouldn’t have a season, let alone a Senior Night, so I planned it just as I would any year, our last home game of the season,” said Palm Bay manager Sean Comfort, whose team will hold its Senior night celebration on April 20th, when its hosts the Astronaut War Eagles.

The decision is not an easy one, and there is no clear and correct answer. Already teams have had to change their plans after the scheduled opponent either rescheduled, or opted out of the season altogether, in some cases. Other programs have moved it up earlier in the year, only to have to change those plans when one of the teams was affected by COVID protocols.

At Santaluces in Palm Beach County, the team is set to hold their Senior Night on April 20th against the Boynton Beach Tigers. The contest is the Chiefs’ last home game of the regular season. There is an understanding that the event may be moved up to a date sooner in the season. 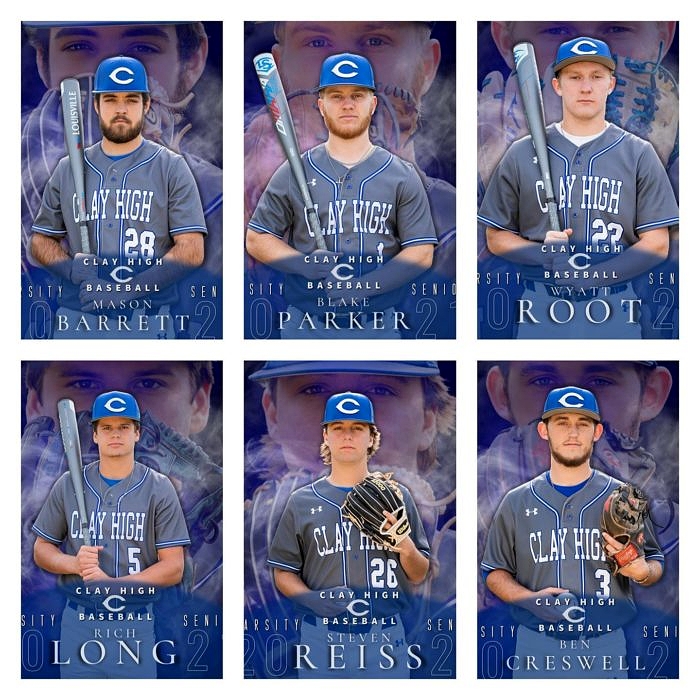 The Clay Blue Devils recognized their seniors on their Facebook team page.

“I have discussed with my Athletic Director about moving it up,” Santaluces manager Nick Franco admitted. “He wants me to. I don’t really want to, but we probably will end up doing it. In my opinion, Senior Night should recognize the contributions of the seniors at the end of their careers. If it’s moved up just to have it, with the fear of COVID affecting it, then what are we saying as leaders? How about, we as leaders talk to our kids about being responsible with COVID? Mask up, social distance and sacrifice your social life a little bit because you care about your baseball season. COVID has no calendar or clock. Other schools scheduled theirs earlier and it was affected by COVID and they just had to reschedule it. We’ve been fortunate enough to have gotten all games in unaffected by COVID.”

Certainly, many Florida programs have not been as fortunate so far this season. Thus far these isolated cases have not resulted in any major outbreaks, but they do serve as a constant and immediate reminder of the current landscape.

“We’re very fortunate to even be able to play baseball this year,” Porter said. “We thought it was right for our seniors to have that one night that they are going to look back on with their families. We had a great result the other night.”

Most teams perform very well on Senior Night; there is an unmistakeable boost that comes from those special celebrations amongst your loved ones. With students sacrificing so much right now, and especially student-athletes, these events are as vital as ever to reward those sacrifices.

For Santaluces, sacrifices have already been made. The program has traditionally hosted the Santaluces SLAM Tournament during the opening week of the season at their home field at the Santaluces Sports Complex. However, district restrictions prevent more than four teams together this high school season, and therefore the tournament could not be held. Yet on the day first day of Spring practice for the Chiefs, there was a travel ball tournament held at the complex.

It is tough for Coach Franco to tell his players they are not allowed to hold their tournament when they watch another organization successfully execute the same function. 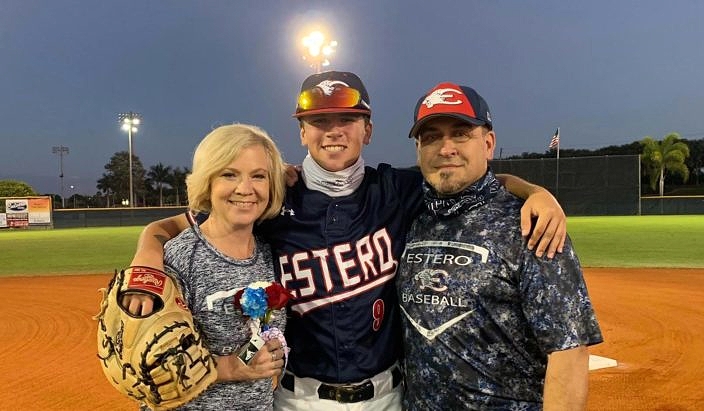 Estero senior Gavin Skinkis, with his parents during the Wildcats’ Senior Night at their home opener on Wednesday, February 24th against the Golden Gate Titans. Skinkis was one of nine Estero seniors honored before the game.

“If you have protocols in place, have leaders that stress the importance of them, and it can still get us closer to back to normal, why can’t schools follow suit?” Franco wondered. “If the park that we play at can run a tournament under COVID guidelines, why can’t schools? I’m a PE teacher. We have anywhere up to 100 kids in the gym at one time, spread out in the bleachers for class. But I can’t run an outdoor tournament with COVID protocols in place. I don’t get it.”

Frustrations are certainly understandable. There is no perfect solution and the future is not clear. Baseball teams are caught in the crosshairs of these times in some respects, and they must simply weather the storm however possible.

Senior celebrations are one positive opportunity during these trials. Therefore programs are making a point to have something special for their seniors, regardless of it keeps to tradition or creates something new to contrast the times.