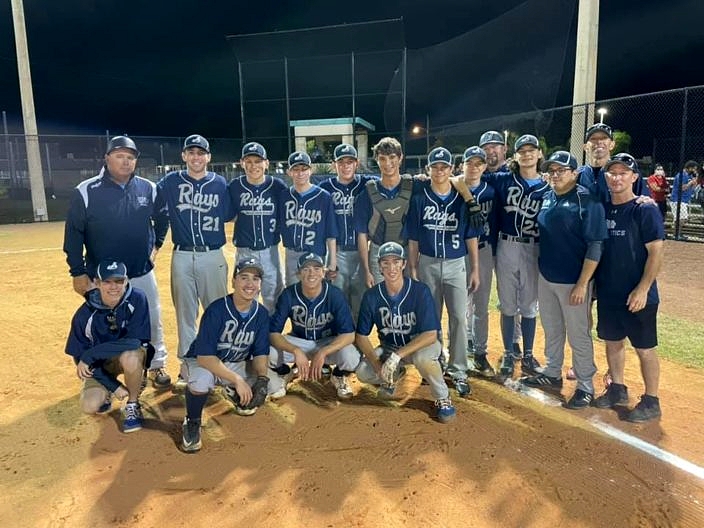 The Marco Island Manta Rays, following their 15-5 win over the Mason Classical Paladins in the 2021 season-opener on Friday evening. *Photo courtesy of @MarcoIslandAcademy.

The Marco Island Academy Manta Rays had waited longer than just about anybody to play a home baseball game. Friday evening the teams hosted its first opponent since 2019, and the Manta Rays offense put on a show and pounded the way to a 15-5 victory over the Mason Classical Paladins.

Marco Island (1-0) began last season on the road, and never got to play a home game before the season was disrupted by the start of the COVID pandemic. Prior to Friday’s big victory, the team had last played at home on April 22nd, 2019, a loss to the Gateway Charter Griffins.

Meanwhile, the Paladins (0-1) took the field for their first varsity contest in program history. It seemed fitting it came against a host like the Manta Rays, as Marco Island itself is still a young school. The academy opened in 2011, and the baseball team is now in its ninth season of action after beginning varsity play in the 2013 season.

The early innings provided plenty of excitement, before a monster fourth inning paved the way to a Rays victory. Trailing by a slim, 5-4 margin heading into the bottom of the fourth, the Manta Rays erupted for nine runs to pull away in the victory lane. They sent 12 batters to the plate during the frame, and the first four hitters all reached to get things going.

Consecutive RBI doubles from Colby Chute and Joe Reisinger worked to clear the bases and open the lead, and Matthew Graybill delivered an RBI single that pushed it to a 12-4 advantage. Marco Island got three more unearned runs to top it off.

First baseman Daniel Cuellarsola was 1-for-3 with an RBI and a run to lead the Paladins.

Marco Island won its first home-opener in five years, since a 15-0 victory over the Everglades City Gators to start the 2017 season.