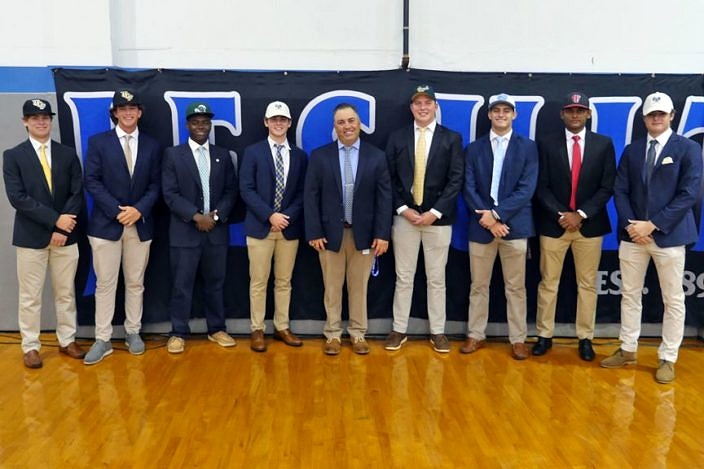 Serious baseball players look forward to this moment their entire careers, and yet this year is nothing like the vision. This year has brought fewer opportunities to be seen and even fewer opportunities even available, with restricted celebrations and even with cloth masks sometimes covering the trademark smiles. But none of that can dampen the joy that comes when a student-athlete signs with their college of choice and paves the path to their future.

Across the state of Florida and the nation, this week marked the official National Early Signing period in which many baseball players officially signed their college letters-of-intent. Amidst the backdrop of an ongoing global pandemic that wiped out most of the 2020 Florida high school season, severely limited recruiting processes and also left far fewer scholarships available, these celebrations were even more welcomed than ever.

“As coaches we all love to compete and win games, but days like Wednesday are why we coach,” said Tampa Jesuit Manager Miguel Menendez, who had eight players sign on Wednesday. “To see eight of our young men have the chance to celebrate with their school, their families, and their teammates was great to see. Especially during the times we are in and after losing a majority of their season this past spring. It truly was a reminder that even though the journey may take unexpected turns, life is about what you make of it. These young men continued working and never felt sorry for themselves. To see them be celebrating during this time was wonderful, and I’m just happy I got a chance to be a part of it.”

Jesuit represented one of the larger groups of signees, with Calvary Christian-Fort Lauderdale leading the way with eleven total college signees. Spruce Creek had nine seniors all sign, Lakeland Christian, Miami’s Belen Jesuit and Miami’s Doral Academy all also celebrate a large group of eight players all signing, while Miami’s Columbus High has a group of seven total baseball signees.

“Every year we take great pleasure in seeing the players achieve their dream of advancing to play at the next level. This year we have a lot of seniors signing early, and we will have three or four more sign later in the year,” Belen Jesuit Manager Jerry Albert said. “It’s definitely been a unique year. These guys all missed out on their junior seasons and the Fall has been much different as well. To their credit the kids have maintained focus throughout it all.”

Even though so many Wolverines were able to find the right college fit, it certainly was not easy.

“Dorian, Gio and DeGoti all committed early, but for the rest of the seniors, it was a very difficult year to match kids with schools because of the COVID situation and coaches not being able to travel as much, if at all, to see the players,” Albert said. “Fortunately we have a lot of very strong relationships throughout the country who trust in our evaluations. That’s been the key for a number of these guys and for the players who will get their situations figured out later in the year.”

Every player is different, but academics certainly plays a tremendous role. For example, South Broward’s Anson Graumann sports a 4.87 GPA that helped land him four scholarship offers, and he has signed with Calvin University in Grand Rapids, Michigan. Graumann chose to become a Knight due in part that Calvin is also ranked as one of the top engineering schools in the country, and he plans on majoring in electrical and computer engineering.

Graumann has also had several of his family members attend Calvin, including some who also played baseball.

“I chose Calvin University due to strong family ties with the school and area,” Graumann said. “I am happy to be the next guy up in carrying the tradition on.”

Guys would love to start every high school game and to be a star right from their freshman year, but seldom is that the case. Most begin their careers in junior varsity, where they have to grow their skills enough to transition into varsity ball players capable of earning a college scholarship. So it is always extra rewarding to see when guys like Lake Mary Prep’s Aidan Warner sign. After being a captain of the junior varsity squad his sophomore season, Warner started on the mound and at catcher last year and earned a chance to sign with Brevard College in North Carolina.

Some schools enjoyed large groups of teammates all signing together, while others were able to focus all the attention on a sole player signing from their school. Even where gatherings were held, some signees opted not to attend amidst the need for social distancing these days. Some held smaller gatherings at their homes or elsewhere, instead creating a more private and intimate moment to signify the big day. 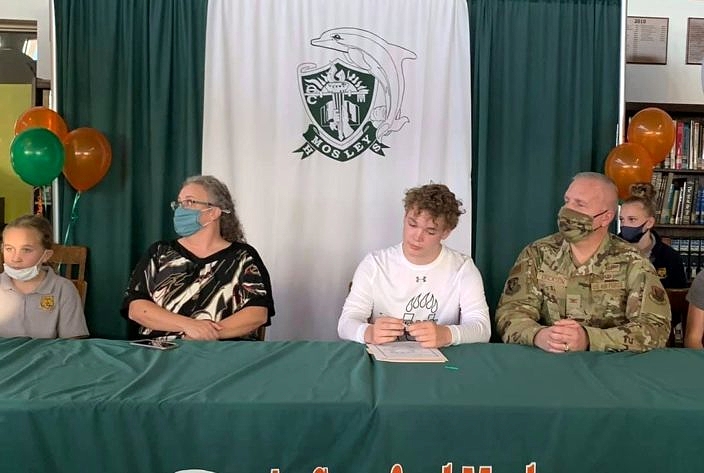 No matter how it was celebrated, what mattered most was simply to do something special to highlight the special occasion and blot out the unusual circumstances that are the current norm we all live in. In years to come, the sight of everyone wearing masks in the pictures will serve as a reminder of this time in history.

It certainly is nice whenever the pandemic can take a back seat to more positive and exciting news.

“The pandemic definitely made signing a lot different than usual,” said Wellington’s Chandler Marsh, who signed with the University of Georgia, alongside teammate Dawson Ball, who signed with Florida Atlantic University. “Fortunately I had one teammate from Wellington sign with me, along with lots of previous teammates from years back. Having friends with you definitely makes it better. It is definitely going to be something to remember, all of the good and bad memories all at once from the year 2020. Hopefully looking back in a few years we will be all over this pandemic. Although, signing my NLI is definitely going to be a great memory I will remember for years to come.”

With COVID-19 cases beginning to surge again nationwide, it was another example of how this pandemic has affected the signing process.

“The coaches at UGA were talking about the possibility of having to push back National Signing Day, so I’m very fortunate they did not,” Marsh said. “Yet, I’m super excited to be signed and one step closer to college.”

As rewarding a moment it is for the players, it means so much more to both the coaches and the families. It brings pride to both family and program, and it is a chance to personally recognize individuals and all that they have done for their paternal and their baseball families. 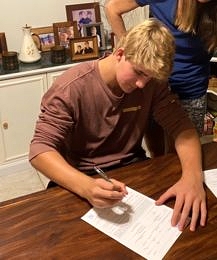 Jupiter’s Noah Steckley signed with Florida Institute of Technology, in a celebration at home with his family.

At Community School of Naples, six-year varsity starter Cooper Smith signed with Stetson University, the same college that his father also played college baseball for. Having played for Community School since he was in seventh grade, Smith has left quite a mark in his high school career. Celebrating this time to ink his college future also affords a chance for those closest to Smith to offer their appreciation.

“Cooper is a fierce competitor who always wants the ball in clutch situations. He is a demonstrable leader on the field, in the clubhouse, and on campus,” Community School of Naples Manager Chad Ott said. “Cooper demands a lot from himself and those on the team, including his coaches. Teammates and classmates alike look up to Cooper and he has left a mark on those in our community. I can tell you that he has personally impacted the way I think about managing a team and he has made me a better coach. I am grateful for the years we have had together, and look forward to one more special season.”

Players sometimes forget just how much their coaches root for them, and how truly excited they are every time one of them has something positive happen in their lives. Occasions such as National Early Signing afford that chance to remind them.

One such case was at Olympic Heights, where Jake Neese officially signed with Christian Brothers University.

“I could not be more proud of this young man,” Olympic Heights Manager Casey Beck said. “I can say that he is one of the hardest working kids I have ever coached and will be missed tremendously once he leaves OHHS. He is the type of kid you root for, the kind of kid you want to be associated with for life.”

The memories this week are the memories you want to remember for life. They come at a time as welcome as ever, and these student-athletes makes us all proud.