Mulhollen has been at the helm for the program since the 2014 season, which is actually his second stint as manager, after also coaching the team from 2006 to 2009. He then took a few years off to focus on his family and his three young daughters at the time, before returning to the diamond as a pitching coach for the Riverview Rams, prior to his return to the Mooney family. The 2020 season is his 11th year with Cardinal Mooney.

“The success that we have had at Cardinal Mooney is all about the players that we have had come through the program, buying in to what our coaches teach, and the players living it out on the field,” Mulhollen said. “We have had some extremely high-talented ball players come through Cardinal Mooney, and its been exciting to watch them play. This milestone for me is all about the boys wearing the Mooney jersey and seeing kids going on to play college baseball. That’s the reward!“

The victory came by playing the brand of baseball that Cardinal Mooney has come to be known by, a gritty, low-scoring affair that highlighted the pitching and defense. Dylan Robertson pitched a complete-game shutout while allowing just two hits, a walk and a hit batter, and he struck out five. Meanwhile, the defense did not commit an error behind him.

“We preach to the boys that throwing strikes and playing great defense, mixed with timely hitting, will win you ball games,” Mulhollen said. “Each group takes pride in doing these three things, but our main priority is to build around throwing strikes. We have been blessed with some very good arms over the years.” 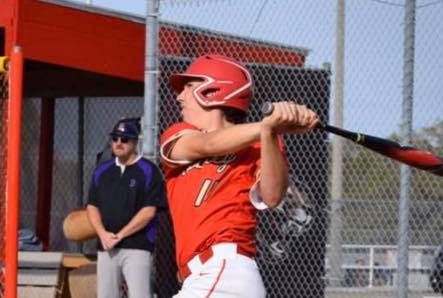 The offense came thanks to one key swing from Aidan Troy. After Robertson walked to begin the bottom of the first, Troy connected on the first pitch he saw and sent it over the fence for a two-run homer.

Those runs then stood as the only ones scored in the contest. The Cougars (4-0) turned a double play to end the fifth and Robertson took care of the rest on the mound.

The Tornadoes (2-1) had their best scoring chance in the top of the first. With two outs, junior captain Gehrig Wright laced a triple on a line drive to center field. But Robertson induced a fly ball for the third out that escaped the threat, and Booker managed just three base runners the rest of the way.