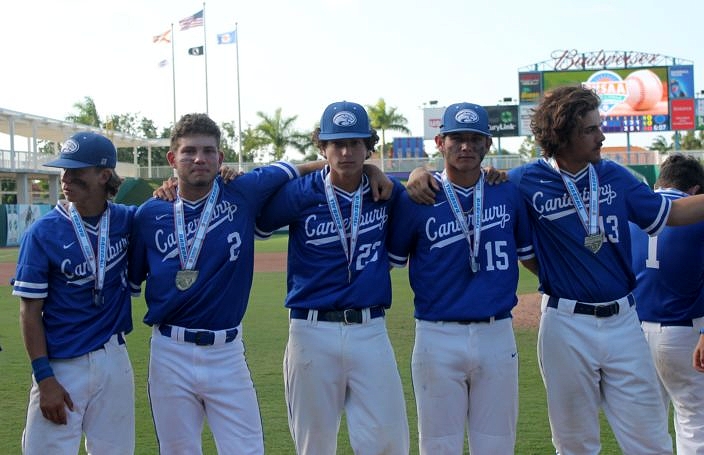 The Cougars share in solidarity and appreciation of the historic run they have enjoyed these past four seasons.

The Lakeland Christian Vikings are the 2019 Florida Class 3A state champions.

Even hearing the words there are many that might not believe them. For the past three seasons the Canterbury Cougars have dominated 3A, and they were back in the state championship game again on Saturday. Meanwhile, no team from Polk County had won a state title in any sport since way back in 1995.

That is the true magic of this Vikings team: they defied all odds because they refused to believe any history about them that they did not write themselves. They dictated the outcome by playing some of the finest baseball they could, and that ending was a 3-1 victory over Canterbury in Saturday afternoon’s state championship at Hammond Stadium in Fort Myers. The two sides both competed at a high level befitting of a title game, and it was baseball at its very finest.

“It was a well-played game and we just needed a break here and there and that didn’t happen today,” Canterbury manager Frank Turco said. “I can’t say enough about our community. Our community was out there today and I thank them for the support they gave us. I’m going to miss all of the seniors because we have history together. They may not miss me yelling at them but I hope they appreciate what I’ve meant to them and what they’ve meant to me.”

Cade Kotny threw a complete game and the Vikings scored all of their runs in the bottom of the second. Kotny displayed excellent poise and composure. The right-hander needed just 86 pitches to go the full seven innings, and he scattered three hits and four walks, while recording two strikeouts.

“Our kids battled and their pitcher did an excellent job of keeping us off-balance,” Turco said. “We knew he would thumb us a little bit throwing breaking balls and just trying to take what he could from the umpire, and he reminded me a lot of Bryce Einstein, except Bryce is down a little more. We just got out in front a little too much and hit too many fly balls.” 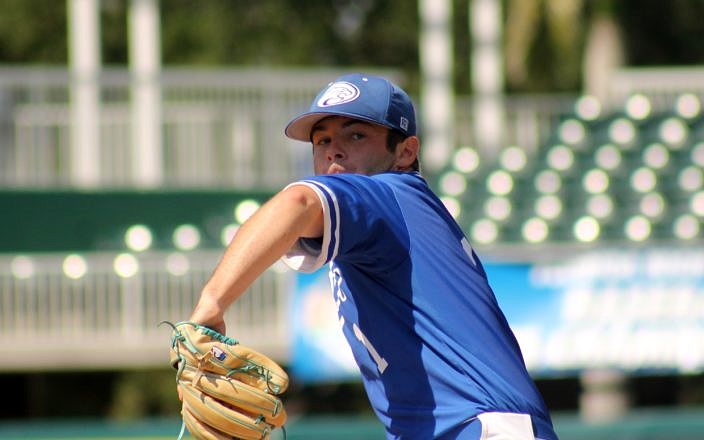 Senior right-hander Will Shea made the start and took the defeat for the Cougars, allowing three earned runs with two strikeouts in three innings of work.

The players were focused on figuring Kotny out with the at bats they had at their disposal. Hitters communicated to decipher what pitch he used for strikeouts, what his out pitch was and what he was not throwing for strikes.

“The game gets a lot easier when you know what is coming,” senior Cooper Weiss said. “My first at bat I was a little antsy and the ball was on the outer half, but it was a great pitch. He was there all day. Sometimes when you are sitting on a pitch and you don’t get it and you are behind really quick, everything just goes out of your head really fast.”

Meanwhile, the Vikings executed their game plan to perfection in taking the lead early, going up 3-0 in the second inning. Ryan Jenkins lined a lead-off single to left field, catcher Canaan Bennett walked and was replaced on the bases by courtesy runner Hunter Laurell and Ian Anderson reached on a slow grounder to third base that loaded up the bases. Two batters later, Jovanni Canegitta delivered a clutch hit up the middle that scored a pair. Jake Fox followed with an infield single to first base that plated Anderson to increase the lead. 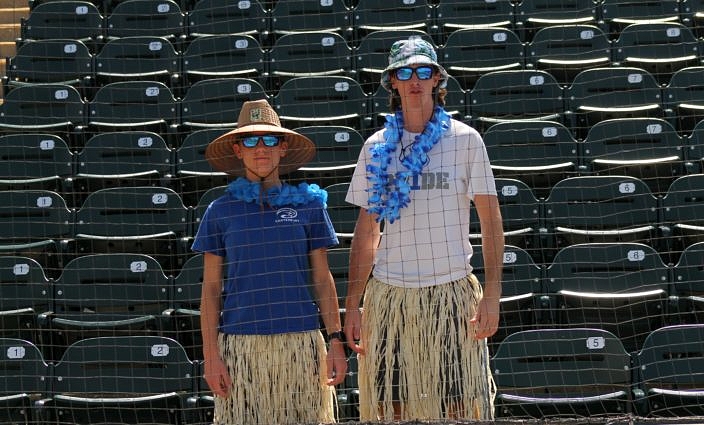 Canegitta was a game-changing force in the Final Four, delivering the sort of performance one only dreams of. The center fielder went 4-for-6 with a double, a home run, a walk, three RBIs and two runs in the two games at the state tournament.

The Cougars (26-6) answered back and got on the scoreboard in the fourth. Will Cialone reached on an error and Bryce Einstein then sent a flare to left field for a base hit. A bunt from Aaron Gebig advanced the runners and Alex DeMarco got the ball on the ground for a 6-3 RBI groundout.

Einstein was 2-for-2 and had two of the team’s three hits.

Canterbury kept it close with some big defense in the fourth. A trio of walks loaded the walks with one out, but Julien Meyers snared a liner and then relayed back to Einstein at first base to pick off the runner for an inning-ending 4-3 double play.

The Cougars battled to the very end, and worked with every single to figure out a chink in Kotny’s armor. The hurler was unwavering even despite allowing base runners in each of the final two innings. 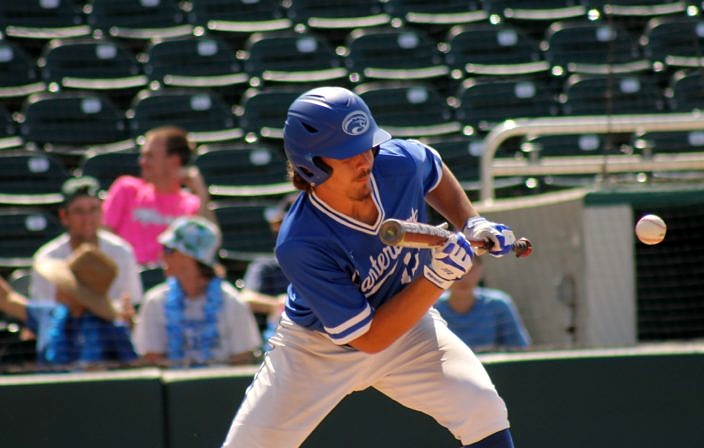 Aaron Gebig drops down a sacrifice bunt, something he successfully executed twice when called upon on Saturday.

Having come so close to becoming only the second Florida team to ever win four straight state championships, the Cougars conducted themselves with the same class in defeat as they exhibited during three years of championship glory. The team saluted their many fans in gratitude before then taking a moment to thank one another and reflect on the incredible run they’ve enjoyed together in playing in the title game for four straight years.

As painful as the defeat felt, it was difficult for the Canterbury players to hang their heads. The Cougars did not commit any errors, they were intense and composed and they did not do anything to beat themselves. They were simply defeated by an opponent playing the caliber of baseball that led to three championship trophies at Canterbury.

“A lot of these kids have not been at the rock bottom and the mental part of the game where you feel like it is all on you,” Weiss said. “A lot of these kids are going to have to bounce back, because four years ago we were in the same situation. We lost a tough one at jetBlue Stadium in the state semi, so they are going to have to write their own legacies the next three years. Hopefully they do the same thing. That was my role and I found that maybe it isn’t going to be in a positive way, but in the most negative way possible in losing the state championship.”