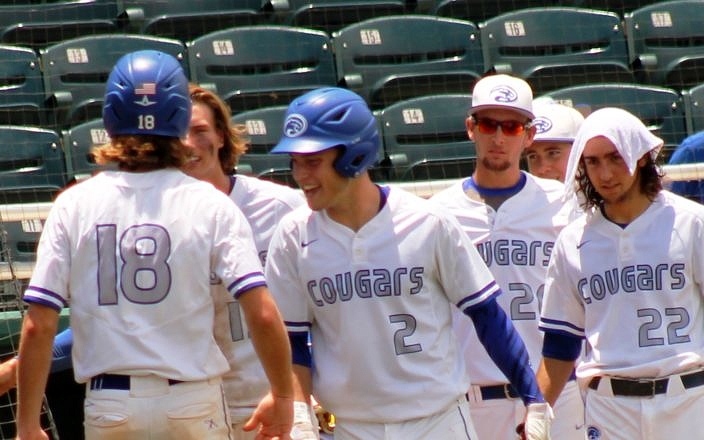 The Cougars celebrate after Julian Meyers scored to give them a 3-0 lead in the second inning.

It is hard to imagine that the Canterbury Cougars have not reached their full potential yet this season. Following a close, 4-3 victory over John Carroll in Wednesday’s Class 3A state semifinal at Hammond Stadium in Fort Myers, Cougars manager Frank Turco admitted that he has yet to see his team play the best baseball that they are capable of. Knocking on the door with a chance to win its third consecutive state championship on Thursday presents the greatest opportunity for the club to do just that.

Facing a young and scrappy John Carroll squad and sophomore ace Nick Gorby, Canterbury managed to put together just enough offense to escape with the victory. Trennon Turco’s RBI ground out in the bottom of the fourth drove in William Shea for the winning run, and the Cougars (26-5) held off one final rally bid in the bottom of the seventh to preserve the win.

“It was a nail-biter once again, and pitching and defense has been our mainstay,” Coach Turco said. “We had a few hiccups here and there, but we did what we needed to when we finally had some small-ball situations. We capitalized on them and had success. I would like to see us play a little better and swing the bats a little better, but we tip our hat to Nick Gorby. He did a great job out there; he is a competitor and he mixes pitches really well. We did just enough to get a ‘W’.”

Gorby’s pitching helped keep the Rams (19-8) alive in the action all the way to the conclusion. The left-hander went the distance on the mound, allowing one earned run on six hits and a walk. He struck out seven and needed just 81 pitches to go the full six innings. Despite the end result, the young hurler was overwhelmed with pride for how he and his teammates played on Wednesday and every day leading up to it.

“We played an outstanding game. I’m proud of our teammates, our coaching staff and I am just proud of everybody for what they did and that we made it this far,” Gorby said. “At the beginning, we didn’t think we were going to make it this far. But we did and we were still writing the story. The emotions going on was a lot, and from the beginning of the game everybody was nervous. I just told the guys to play it like it was our last, focus and do what we do best. Everybody dialed in after that and we controlled our emotions.” 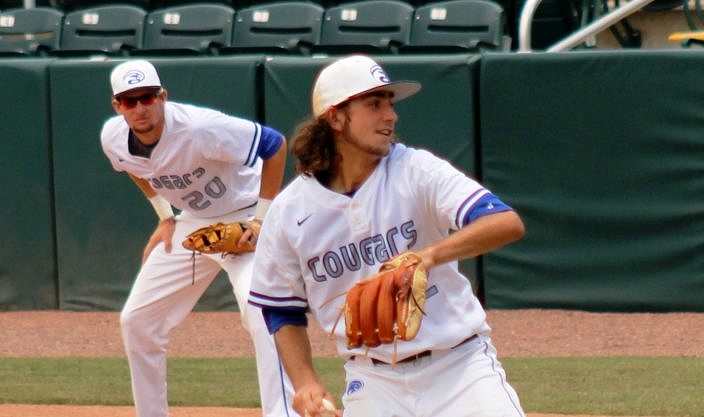 Canterbury took control with three runs in the second inning. Levi Shuck reached on an infield single and Cooper Weiss walked to quickly give the Cougars some base runners. A throwing error advanced the runners, and Shuck put his club on the scoreboard off a wild pitch. Julian Meyers then reached on an error that plated Weiss, Will Cialone singled to center and Trennon Turco drove in another run with a fielder’s choice RBI ground out.

The Rams answered back to get on the board in the third. Jay Allen singled to left, advanced on a passed ball and came around third to score thanks to an RBI single off the bat of Brandon O’Brien.

“We combined our emotions together as a team, instead of separate,” Gorby said. “We played as a team and not like individuals. We had each other’s back and we played like we were brothers.”

John Carroll threatened to break things open by loading up the bases with no outs in the top of the sixth inning. O’Brien singled to the shortstop, Kelsey Ward followed with a base knock to left field and Andrew Bourque walked to fill up the bags. This prompted a quick visit from Cougars Assistant Coach Willie Eyre to help reign things back in.

“That was a moment that he needed to bring everybody in and he calmed everybody down and got us going,” Cougars starter Nick Vanderhof said. “I wanted to go out there with everything I’ve got, just put your high school career right here in these pitches. I think I did exactly that, got the two strikeouts back-to-back and a ground ball and we got out of there with no harm.” 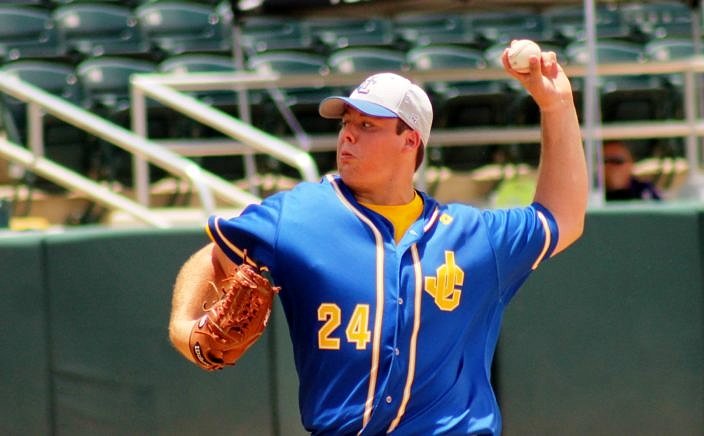 John Carroll’s Nick Gorby pitched a complete-game while only allowing one earned run to keep the Rams alive to the finish.

Vanderhof responded by striking out the next two hitters, and then induced an infield grounder to first to quell the threat unscathed.

John Carroll made one final strong push with their last swings in the bottom of the seventh. Trailing by three runs going into the frame, the Rams got it going to keep their season alive. Justin O’Leary was hit by a pitch and Mike La Rocca followed by lining a double into left field. O’Brien then came through with a clutch single to right field that drove in both base runners.

Cougars reliever Bryce Einstein induced a pair of flyouts that ended the threat and preserved the victory. The close call did serve as a strong reminder of the level the Cougars need to perform at in their final and also their biggest game of the year on Thursday.

“I thought by now I would have us firing on all cylinders, and I don’t yet,” Coach Turco said. “It’s been a slow process for us, but it is something I relish. The kids are working so hard and I really feel like we’re waiting for a break-out game. We only have one one game left so I am hoping maybe that will happen.”