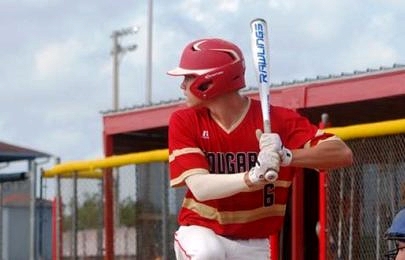 The Cardinal Mooney Cougars continued their winning ways with a 3-0 shutout over visiting DeSoto County on Monday evening. The Cougars (14-8) won their second straight and have now won six of their past seven contests.

Junior Peyton Jula got the start on the mound, and he earned the victory after taking his club through the first five innings unscathed. The right-hander allowed two hits and a walk, while also hitting a batter, and he struck out three.

The Mooney bullpen took care of the rest. Freshman Aidan Troy tossed a scoreless sixth and junior Mars Moxley picked up the save after pitching a clean seventh inning. Both relievers recorded one strikeout.

Braden Steele delivered a solid outing for the Bulldogs (4-13), as he went five innings while allowing just three earned runs. Although the Cardinal Mooney batters connected for eight hits off of him. Steele managed to limit the damage to keep his club in the contest and allow his own hitters more time to figure out the Cougar pitchers. He walked two and struck out one.

Cardinal Mooney scored all of its runs in the bottom of the second inning. Paul Labriola got things started when he laced a triple to right, which then allowed him to easily score when Robbie Vassallo succeeded in getting a ground ball to the right side for an RBI ground out. Max Smyley then kept things going with a single to left, as the Cougars quickly filled the bases when Tommy Hubbard doubled and Moxley walked to follow. Freshman Caden Chamberlain then gave his club some breathing room with a single that scored two base runners. Chamberlain was 2-for-2 on the night.