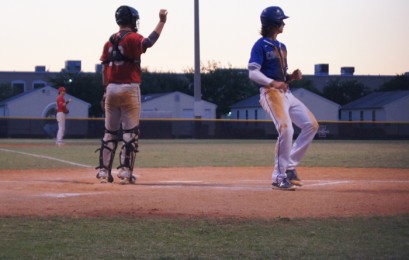 Sam Keating crosses the plate for the second run for the Cougars.

The first place Cougars faced off against the second place Evangelical Christian Sentinels on Tuesday night in a 3A-6 match up. The Cougars shut down the Sentinel offense by giving up only two hits, while their offense picked up in the middle of the game for a 10-0 victory.

“We were a little-off balance at the plate at first but then we got our timing and rhythm down,” said Cougars manager Frank Turco. “Our pitching was effective and I’m proud of our whole team tonight.”

Sentinels starter Jake Lewis worked through the first getting three straight outs. Cougars starter Bryan Eberle also had a commanding inning, striking out two before walking Ben Specht, who was picked off to end the frame.

Lewis’ demeanor on the mound was calm as Michael Matter reached on an error. The next pitch turned into a 6-4-3 double play, followed by a strikeout that ended the half. Eberle put two runners on with two outs but then got a strikeout to end the inning.

Lewis’ dominance extended into the third, where he was able to get another three quick outs, while Eberle dialed back in on the mound and shut down three straight batters.

The Cougars’ offense seemed to figure out Lewis in the top of the fourth. A lead-off single by Carter Smith and a sac bunt from Donovan Duvall put a runner in scoring position with one out. Sam Keating singled, scoring Smith and giving the Cougars the first run of the game. Keating scored after he stole second and third consecutively and was brought in by Cooper Swanson, who beat out a throw on what would have been a double play.

The inning ended after a pop fly to second, but the damage was done and the Cougars were up by two. 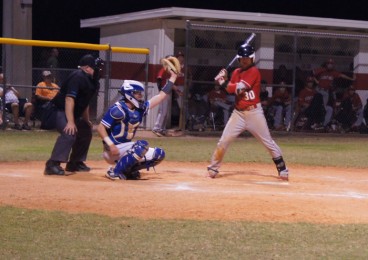 Sebastian Genter had the only hits for the Sentinels in Tuesday’s game.

“I’m usually looking opposite field when I go up, and I put a pretty good charge into one,” said Smith. “Sometimes the bats come out flat, but we picked it up throughout the game.”

Eberle kept his performance going through the bottom half of the inning.

When the Cougars came up to bat again Jake Crandon reached on an error and stole second. Smith doubled, scoring Crandon and putting the Cougars up by three.

The Sentinels put two runners on in the bottom half of the fifth after a single from Sebastion Genter and a fielders choice attempt that resulted in no outs. But Eberle remained composed and got the next three batters out to end the threat.

“I don’t let any of the runners on base bother me,” said Eberle. “I’m pretty strong mentally; once I’m on the mound I just want to dominate.”

A lead-off triple by Matter started the sixth for the Cougars. A sac fly from Giovanni Lorenzo brought the run in. Swanson followed with a double and scored after an error on a throw to first. A double play put a stop to the bleeding but Canterbury was now up by five. In the seventh five straight walks and multiple passed balls allowed two runs to score, and a double by Cooper Weiss knocked in another two to close it out.

“Our pitcher kept us in the game for a while, but then our errors kind of made the wheels fall off. It’s been our Achilles Heel all year,” said Sentinels’ manager Jeff Kieffer.