Mariner Walks Off In The Ninth Against Port Charlotte 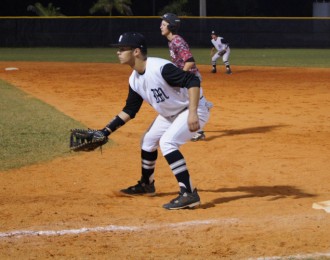 First baseman Justin Waibel prepares for a grounder, he scored twice in the game.

The Mariner Tritons and the Port Charlotte Pirates put on a back-and-forth show for fans at Tuesday night’s district game.

The Pirates scored all of their runs in the third while the Tritons put up two in the second and two in the fourth. Both pitchers went seven innings but the teams needed more than that. The game went to extra innings and, after loading the bases twice, Tritons catcher Jorge Sunti brought in the winning run late in the ninth as the Tritons to walked off 5-4.

“Our young players stepped up, Meredith got a key hit and so did Nolan Byers in the eight spot,” said Tritons manager Thomas Woodley. “We need to shorten up our swings with the bases loaded and just play pepper instead of trying to hit it out of the park.”

Both teams struggled to get offense going in extras until the ninth inning when the Tritons loaded the bases again after two walks and an error. Jones got two infield fly outs before sophomore catcher Jorge Santi came up and hit a hard ground ball up the middle allowing Jimmy Meredith to score the winning run.

“I just try to relax and take it pitch by pitch,” said Sunti.

The Pirates put runners on first and third in the first but could not capitalize. In the second they put another runner on but left him at first after a ground out.

The Tritons couldn’t get anything started in the first either, but in the second found some rhythm.  Sunti walked and first baseman Justin Waibel reached on an error. They were both moved over on a passed ball and then scored after a triple hit by second baseman Nolan Byers. 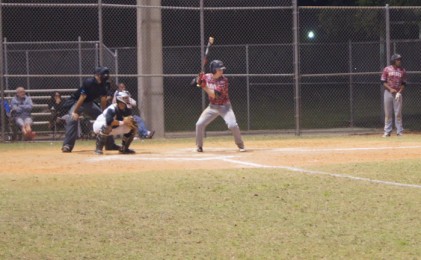 Catcher Kevin Conway had two of the Pirates’ RBI’s and tripled.

The Pirates answered back in the top of the third after two consecutive singles put runners in scoring position for catcher Kevin Conway, who tripled and scored them both. A botched fly ball allowed him to score and landed right fielder Roman Reynolds on first. Second baseman Tim Smith hit a ground ball that was knocked out of the fielders hands by Reynolds on his way to second. Reynolds made it to third after tagging up on a fly ball, making it first and third with one out. Smith stole second on the next pitch. An overthrow allowed Reynolds to score. Making the score 4-2.

“We can’t be disappointed in tonight’s game,” said Pirates manager Bryan Beisner. “We got some good hits. Our walks shot us in the foot, but we came to play and we played hard tonight.”

The Tritons stranded a runner on third in the bottom half of the inning but answered back in the fourth with two runs of their own. Jorge Sunti walked a second time and Waibel reached after another walk. Freshman shortstop Jimmy Meredith singled and drove both runners in, tying the game.

“I was trying to sit back  and drive the ball the opposite way,” said Meredith.

In the seventh two consecutive singles put two runners on for the Tritons, and a hit batter loaded the bases. Starter Andrew Arsenault hit a hard grounder that was thrown home to get the second out. With bases loaded Pirates reliever Raven Jones was able to get the third out of the inning sending the game to the eighth inning.