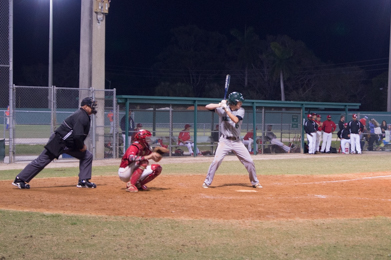 The Palmetto Ridge Bears set a strong offensive pace early in the game and kept it going throughout the night, defeating the North Fort Myers Red Knights 12-1 for their first win of the season. Sound pitching by Jose Rodriguez and Adrian Soler allowed the Bears st start the season 1-0. Palmetto Ridge came out looking ready after a preseason loss to Lely, which Manager Kyle Mason says may have shocked his players into the regular season.

“They’ve been working their butts off, lifting and running like crazy since June,” said manager Kyle Mason. “I was happy with the way we came out tonight.”

Rodriguez retired the first three Red Knights he faced in the first, allowing the Bears offense to get an early start. They loaded the bases after patient at bats by Jeff Pelletier and Stephen Gomez, who both walked. Red Knights pitcher Joe Logsdon was able to settle down and retire the next two batters before any damage was done.

The second inning was another quick one for Rodriguez, who struck out two. The Bears then put on an offensive show, scoring six runs and batting around the order. The offensive onslaught started when Kenny Geiger reached first base on an error. A bunt by Danny Ramos moved him over and a single by Adrian Soler brought Geiger in for the first run of the game. Fielding mistakes and walks plagued the Red Knights and allowed the Bears to score five more runs in the second inning. 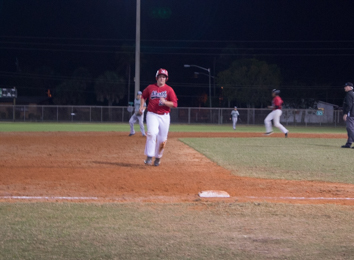 Peyton Bourque on his way to third after a single by teammate Sammy Mieses.

The dominant pitching continued to shut down the Red Knights into the fifth inning, while the Bears tacked on two runs off hits by Pelletier and Sweigart.

“My mentality was to go in, throw strikes, and get ahead of the batter,” said Bears starting Pitcher Jose Rodriguez. “My go-to pitch was my curveball today.”

The Red Knights (0-1) were able to gain some traction in the sixth after Joe Logsdon walked and Peyton Bourque and Sammy Mieses each had a base hit, allowing Logsdon to score the first and only run for the Red Knights. The Bears then brought in Adrian Soler who retired two batters to end the inning.

Palmetto Ridge added a four-run cushion to their lead after more defensive mishaps by the Red Knights. The game ended withe the Bears up by 11 leaving the Red Knights with only a run.

“It’s simple fundamentals,” said Red Knights Manager Tavaris Gary. “We have to get better at being able to mentally come back from an error.”